The English philosopher Herbert Spencer once said: “The great aim of education is not knowledge but action.”

He had a point. We can often talk a good game on subjects that matter to us, but do we always end up carrying things through?

It’s the belief that actions mean more than words that has, in part, sparked the emergence of Save Our Shropshire as a charity. When it comes to climate change and a desire to save the planet, we might all feel a duty to do something, but are we actually doing enough?

Even small steps can start making a difference. After all, from tiny acorns, mighty oaks grow, they say.

And so, Allan Wilson and Richard Watkins set up Save Our Shropshire to focus on educating people about climate change, and what people in our beautiful county can do to live well for the planet. 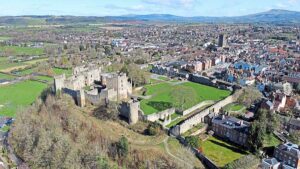 “We want to change people’s habits,” says Richard, whose passion for trying to make a difference shines through. “When I met Allan, who is vice chair of the Shropshire Association of Local Councils, we got on really well and realised that there are a lot of groups around the county who are trying to do stuff with climate change. However, it only works if people will or are prepared to change their mindset and behaviour with regards to climate. Getting people to want to do something is the first big challenge. You have to admit there’s a problem and then do something about it.

“I often use an analogy that the climate emergency is like a bath upstairs. It can be full of water because you have left the taps running but we are arguing about whether we need to turn the taps off just yet. All the time we are discussing it, we are filling up the bath and before you know it, water will go over the edge and you have a catastrophe.”

So how exactly can Save Our Shropshire make a difference?

Still in its relative infancy, Richard and Allan provide education through workshops approved by the Carbon Literacy Project. The workshops help provide advice and education on how you buy, travel, eat, use energy, build and plant well for the planet. They hope to change lifestyles away from dependence on harmful fossil fuels to ones that ensure the future of our planet.

The Carbon Literacy Project are committed to bringing about change through understanding. People who go on a course can get a certificate of their ‘literacy’. People have to prove their understanding and make pledges to reduce their own and a group’s impact on the environment.

Education means people will have the confidence to help others change their lifestyles.

“Our driving ambition is to improve the lives of our children, and grandchildren on a planet that still works for them,” adds Richard. “Both Allan and I are so passionate about this simple idea.

“In Shropshire, there are roughly 200,000 households and 500,000 people. You have to get to that group of people and persuade them they need to change their habits and behaviours.”

The pair are engaged with councils, including Shropshire Council, and have delivered a course to officers and councillors.

“The feedback we get is brilliant,” said Richard. “The idea we came up with was that if you get two people in a council engaged and wanting to do something, that’s the start.

“They might then put an organisation together in the community with four or five people to start talking about how to influence people to change their diet, get electric vehicles, charging points and other things.

“And then, if those five can persuade 10 people and that 10 can persuade 20, we can get through to the 200,000 households we need to get to. It’s called cascade education.

“I’d like to think we are making an impact. Adrian Cooper, the lead officer for Climate Change at Shropshire Council, says that we made a big difference when working with them.

“He feels more of the team’s council members understand what it’s all about and they understand more about the carbon impact of the decisions they make. To be fair, Shropshire Council already do a great job on understanding the need to reduce carbon emissions across the area. Education just helps spread conversation.”

When it comes to what we, as individuals can do, Richard says the most important thing is for households to, at the very least, invest in  conversations.

“We want people to understand where the issues are and what they should try to do now and later,” he explains.  “There’s a menu of things that people need to tackle. We try to provide a menu and then people can make a sensible choice of what they are going to do, what they want to choose.

“For example, you can take energy as a topic. Have you a green energy provider? That can be dead simple to sort out.

“You can change your lighting to LED, consider a change in terms of heating. What about buying better? For example, in terms of clothes – purchase things you really care for, recycle others.

“And travel. Do you go for an electric car? When do you want to get away from a petrol or diesel car?  There are many things we need to look at. We can do some straight away and others might be more subjects we need to think about long term like a new boiler or car.

“But, ultimately, it’s about increasing the conversation about climate change in the community and trying to raise awareness. It’s not just education we need – it’s action.”

You can find out more by visiting saveourshropshire.org