Turning the pages on stately story

The curator of Weston Park has written a book recounting the full story of the estate. Heather Large went along to meet him at the stately home

It’s one of the region’s most treasured landmarks. Today many of us travel to Weston Park to enjoy a concert, attend a classic car show, stroll through the stunning park or admire the grandeur of the stately house.

Now, for the first time, the full story of this fascinating estate and the people that once called it home has been brought together in a new book written by its curator and head of learning Gareth Williams.

Located at Weston-under-Lizard, it has been home, through inherited succession, often through the female line, from the medieval times to the Weston, Mitton, Wilbraham, Newport and Bridgeman families.

In 1986, the house and the 1,000-acre park were gifted to the nation by the current Earl of Bradford and the estate is now run by the Weston Park Foundation, an independent charitable trust.

The book takes a chronological view of Weston Park’s historical associations and those of the people linked to the estate, beginning in the medieval period and continuing to the present day.

The project has been a labour of love for Gareth, who has worked at the estate since 2006.

“Over the years there have been lots of discussions about writing a book about Weston. Rose Paterson, our former chairman who retired in 2019 and sadly died the following year, had always wanted a book to be written but we all felt it was an important story to tell. Current chairman Christina Kenyon-Slaney has also been very supportive.

“When the pandemic happened, I thought it was the right time to knuckle down. Last year, I published a book I had been working on for five years, The Country Houses of Shropshire.

“The publisher, Boydell & Brewer, said it would be the right time to publish the Weston book. That was last May. They said to get the book finished by December which meant I had to finish it by October so it could be seen by the Weston Park Foundation trustees. I spent between May and October writing,” explains Gareth.

HRH The Duke of Gloucester who has family links to Weston provided a foreword for the book. “He was incredibly kind in giving a foreword,” says Gareth.

In his contribution, the Duke writes: “This book explains how the great house came to exist and what succeeding generations brought to its splendour.

“Inevitably my interest is focused on the extensive collections of family portraits, as my mother’s mother was brought up at Weston, together with my many Bridgeman cousins.”

While writing the book, Gareth brought together new and existing research that had been carried out during his time at Weston.

The families who have lived at the estate have been involved in national affairs, in politics, the legal profession, and the military, with significant links to the development of the urban centres of Walsall, Bolton and Wigan as well as the rural areas around the house.

“It’s an account of not just of the house and the families but the wider estates that they owned. Weston has stretched out its ownership tentacles from Devon to Dell in Scotland,” says Gareth.

“It’s a fascinating story, which has not previously been brought together to explain how this very rural English stately home is, in fact, associated with the development of so many other places throughout Britain.”

Chapters focus on the different families who have owned the property, with sections also dealing with the complex evolution of the house’s architecture, and the creation of the globally acclaimed art collections amassed by the Newport family.

The latter includes the highly significant late 17th and early 18th century collection of paintings that had been assembled by Francis Newport, 1st Earl of Bradford and his younger son, Thomas.

Among the works at Weston are paintings by Van Dyck and Holbein the Younger as well as Gareth’s personal favourite – George Stubbs’ Two Horses Communing in a Landscape.

In the Tapestry Room, visitors will find a superb set of French Gobelin tapestries commissioned by Sir Henry Bridgeman in the 1760s featuring the Love of the Gods.

“The tapestries are hugely important because they were made for Weston and were one of only six sets of this type that were made for this country,” explains Gareth, who was previously a regional director of Sotheby’s and curator for the National Trust at Nostell Priory in West Yorkshire.

As well as examining the past, the book also looks at the work of the Weston Park Foundation, which is committed to preserving the estate for future generations.

“We’ve taken the book right up to the pandemic because, for us, and other historic houses, it was a monumental challenge,” says Gareth. 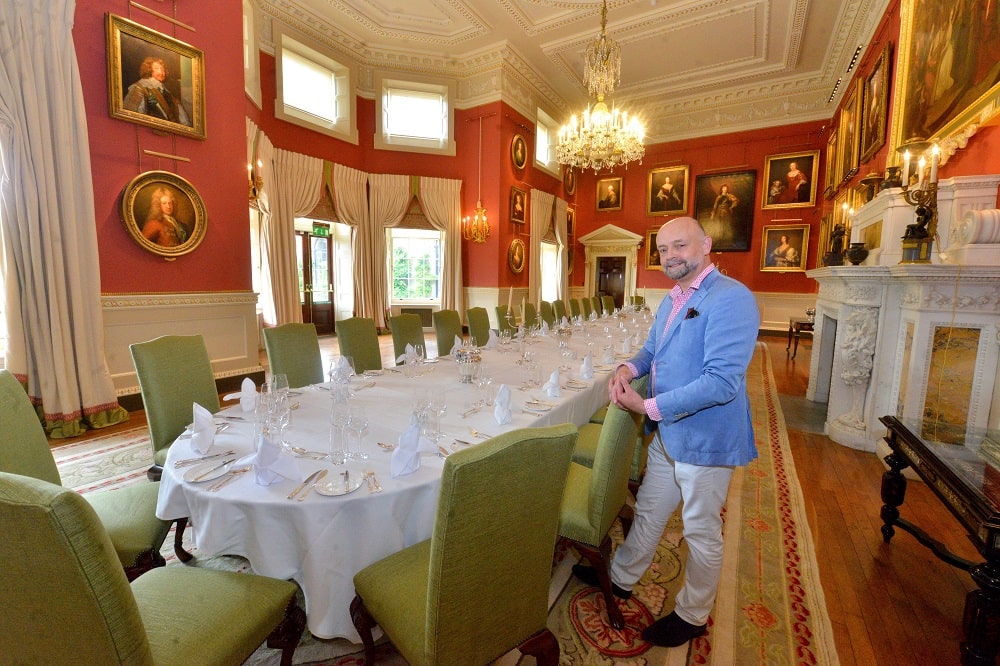 Since the estate was gifted to the nation, the Weston Park Foundation has carried out a large number of restoration projects, which in recent years have included The Granary, which is now home to an art gallery and the Granary Brasserie, and the Garden of Memory in Temple of Wood.

The house is open to the public on a regular basis and also plays host to special occasions such as weddings, meetings for business and other events with guests able to stay in the Victorian Wing apartment.

In the park and gardens, almost all the buildings and follies have been restored, with some of them now holiday cottages, such as The Temple of Diana.

“People can come and stay at Weston. The house is very much used by guests and they get to experience what it would have been like to live in this fantastic building,” says Gareth.

“We want people to engage with the house and enjoy and connect with it. It’s part of the reason nothing is roped off. It’s no good looking after big houses like this if people can’t use them.”

It was important to Gareth that the book respected the legacies of the families that lived at Weston and their heritage.

“Gifting the estate to the nation, and intact, was a really generous thing to do – it was the ultimate sacrifice.”