Sweet treats for our troops

Louise Bennet has been baking her ‘buns of mass production’ to ship out to troops abroad for nearly 20 years. Heather Large chats with the mother of three.

When Louise Bennet sent a fruit cake to her son while he was serving in Iraq, little did she know it would be the start of a marathon bake.

Now, almost 20 years later, she has despatched more than 250,000 sweet treats to troops stationed around the world as well as to military patients injured overseas.
Louise, aged 63, started making her ‘buns of mass production’, as they became known, in 2003 when her eldest son George was a captain with Juliet Company, 42 Commando Royal Marines.
“I started in January 2003, just before the war started in Iraq. I sent my son a fruit cake because I knew it was something that would travel well.

“He wrote back to me weeks later to thank me for the cake and told me that some of the guys got nothing, which I found pretty upsetting”

That was a defining moment for Louise, who lives in Tenbury Wells, and one fruit cake became a batch of fruit buns after she vowed to ensure all of her son’s comrades received some home comforts.
“I decided to make individual fruit buns which they could all share.
“I divided up the mixture into muffin tins so there was one for everybody. I addressed the parcel to all the troops rather than just my son,” she explains.
Since then she has continued the tradition, sending out baked goods once a week to Iraq as well as to the Ministry of Defence Hospital Unit at Queen Elizabeth Hospital Birmingham, and also to the Royal Marines at Haslar Naval Service Recovery Centre in Plymouth.
“I’ve been doing it every week since. It was never meant to be a marathon bake but it’s just continued,” says mother-of-three Louise, who has also sent parcels to Camp Bastian in Afghanistan.
But she no longer sends fruit buns after finding they weren’t surviving the long journey as well as they used to when she first started.
“I had to change to chocolate-chip shortbread biscuits that seem to travel OK. I think as fewer flights started to go out to Afghanistan the buns were expiring.
“They lasted well enough with a journey time of three weeks, but four to five weeks caused me problems. They need to withstand -40c on the plane and +40c on the ground when they get there.
Every week, Louise is busy in the kitchen making a batch of 450 shortbread biscuits, which are packed into airtight, old plastic sweet containers, collected by well-wishers.
“They do take a long time, it’s all the cutting out of the dough and putting four trays in the oven every 20 minutes. Bun day is always Wednesday, I’ve always used a post office that’s only open once a week.”
George, now aged 42, was in the Royal Marines for 10 years and as well as serving in Iraq, also took part in several tours in Afghanistan while Louise’s youngest son, Matthew, 35, also served for 10 years in the Royal Marines. And her middle son Simon, 40, is a doctor.

“When I first started baking it was a way to take my mind off worrying about my son and to feel like I was doing something useful. It was a message of support and to show that someone was thinking of them while they were there and appreciated what they were doing,” says Louise.

Her parcels of baked goods have always been well received by troops and many servicemen and women have taken the time to express their gratitude.
“It’s still really nice to receive letters, they are mostly e-blueys. I once had a letter from an army medic who thanked me and said he was taking a box to troops in a forward operating base (FOB).
“He said it would be a good opportunity for him to sit down with them and ask ‘how are things?’,” Louise recalls.
Louise is also a volunteer with armed forces and military charity Help for Heroes and received an award in recognition of her “outstanding support to the wounded and the military through buns of mass production”.
She remains as committed to the charity’s cause now as she has ever been, saying: “Help for Heroes looks after any member of our Armed Forces who has been wounded, injured or sick because of their service and it’s hugely important we continue to support the charity’s efforts. 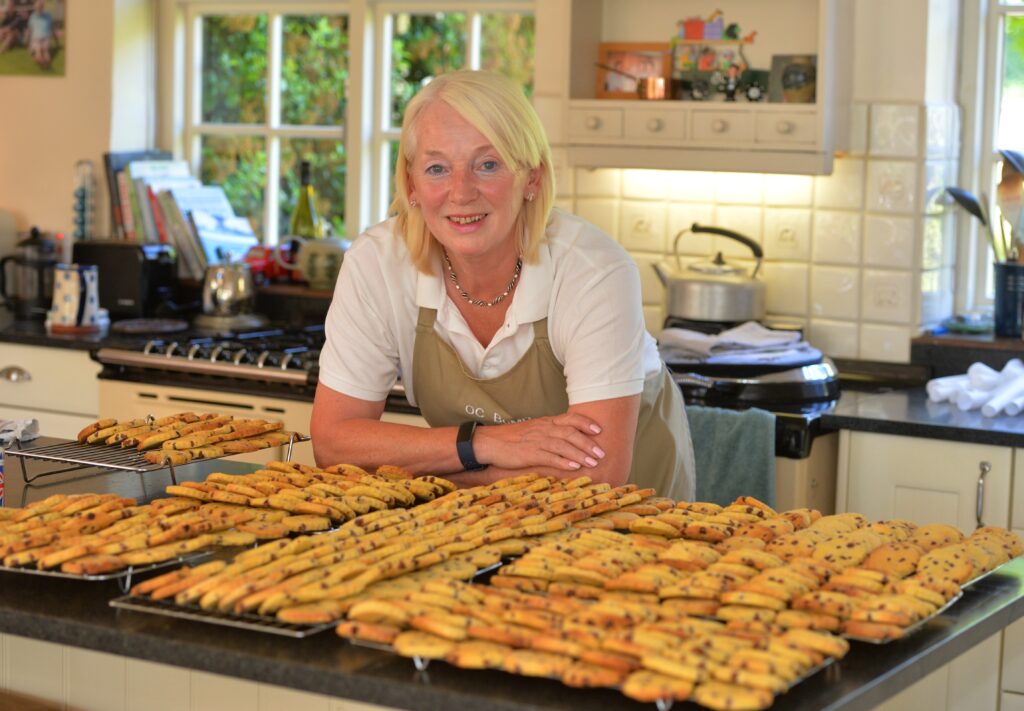 “Our service personnel deserve to be looked after; they are prepared to put their lives on the line for their countrymen and women and, surely, the least we can do is give what we can – both in terms of money and time – to ensure they receive the support they need”

“It’s disappointing that this is left to a charity, but it is, so we have to support Help for Heroes wherever and whenever we can, as more than 90 per cent of its income comes from us, the general public.”
Louise, who has raised thousands of pounds for the soldiers’ charity through cake sales, has even sent some into BBC Radio 2, to the late Sir Terry Wogan, under the pseudonym ‘Loubbylou’.
“He would always give the ‘guys’ a mention on his breakfast show during times of great stress for the families. He was very supportive for many years until his untimely death,” she recalls.

Help for Heroes helps veterans, and those still serving, by providing physical, psychological, financial and welfare support for as long as they need it. The charity also supports families, because they too can be affected by their loved one’s wounds. For further information, or to get support, visit helpforheroes.org.uk