Daniel Morris chats to the makers of wolf manor – a new werewolf movie filmed against the stunning backdrop of the Shropshire countryside. 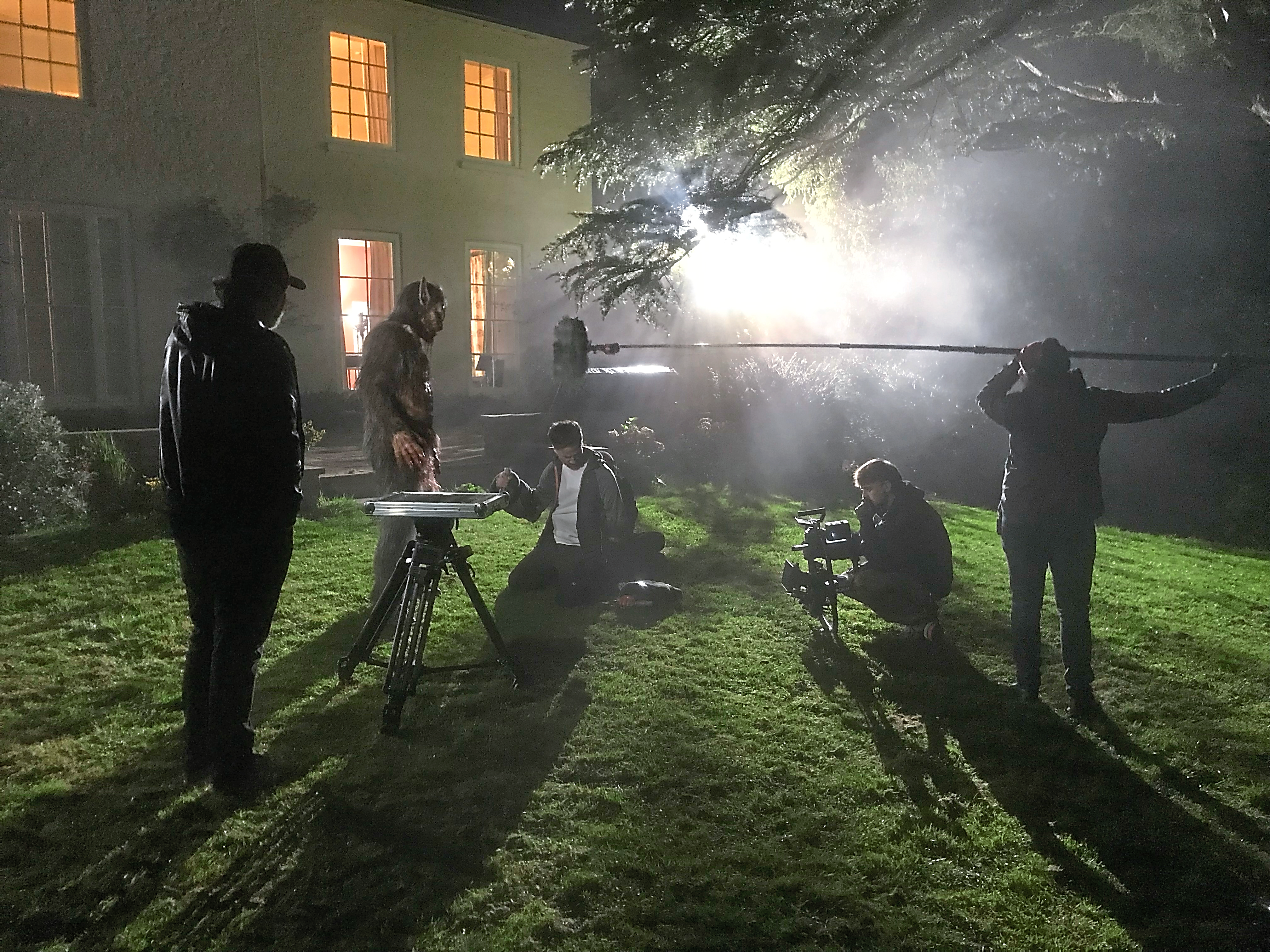 Having been known to have inspired the likes of Charles Dickens, Mary Webb and Edith Pargeter, Shropshire is no stranger to serving as a muse for the creative – the beauty of its rolling hills in the light of the sun unparalleled. Yet what about when the darkness comes, the moon is full, and things start to go bump in the night? This, ladies and gentlemen, is when the real fun begins. Lights, camera, action… Earlier this year, our county’s countryside provided a stunning backdrop to new British horror movie, Wolf Manor. Paying comedic homage to its genre, the flick tells the tongue-in-cheek tale of a film crew who, while shooting a vampire movie at a country estate, fall prey to its resident werewolf beast. An unapologetic celebration of creature-feature horror, Wolf Manor has the gore, the grit and the gruesome deaths. But – channelling the spirit of its makers – it is kept light with plenty of comic relief driven by a cheeky sense of humour. Largely filmed at a country property in Wheathill, the film was directed by none other than actor Dominic Brunt – famous for the role of Paddy Kirk in ITV’s Emmerdale – who was attracted to the project’s no-nonsense nature.

Executive producer Pete Wild – owner of the property at which filming took place – was keen that Wolf Manor’s roots were firmly planted in Shropshire from day one.

As such, he had quickly enlisted the services of local film company, Wild Edric Media, who would come to serve as co-producers along with Mitchell-Brunt Films – the production firm run by Brunt and his wife, Joanne Mitchell.

“Pete contacted us to say he had an idea for a local film project and at that time he wanted somebody to do some drone filming,” said Carl Walker, Wild Edric’s founder and technical director. “That was our original involvement, but four to six weeks from Pete contacting us the project went from quite a small local film to something that was way and above what anybody expected. We agreed to co-produce but Pete also mentioned that the production was going up a huge level as some big guns from the TV and film industry were about to be rolled in.” 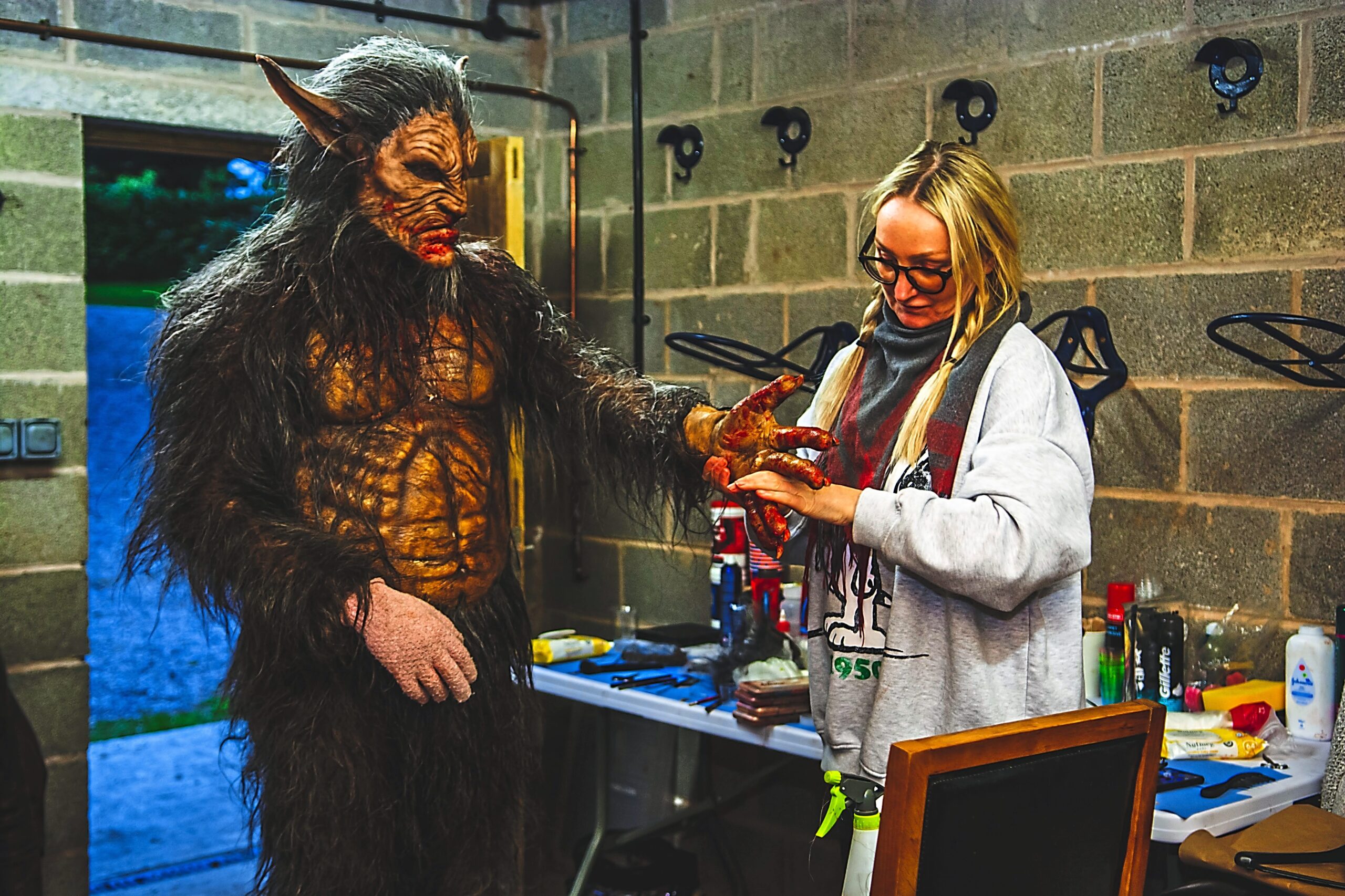 Though he laughingly describes himself as “more of a water pistol” in this regard, Dominic Brunt is a seasoned director whose horror credits include 2013’s Before Dawn and 2017 flick, Attack of the Adult Babies. When approached about Wolf Manor, he was enamoured with its fun, straightforward premise and uncomplicated sense of itself. “With our films, me and my wife usually write our own stuff and then spend a couple of years trying to get the budget together,” said Brunt.“But here, the editor from our last film phoned and said, ‘there’s a film ready to go, it’s fully funded and its already written, would you be interested?’ I had the needed time off, so I said, ‘yeah I’ll read the script’. And it’s kind of this unapologetic pure genre story, which, instead of dealing with allegories, was literally like, ‘we’ll line up these ten people, get them in a house, and then set a werewolf on them’, and I really, really was drawn to that.

“Everything I’ve ever done has usually had an allegorical side to it, and I think horror does that very well – unless it’s a slasher film, what it’s about isn’t usually what it’s really about. But this one really was!

“The script was brilliantly written by Pete Wild and Joel Ferrari, and the film really knows itself. I was completely willing to get on board with that.”

With the production crew assembled, the job now was to find the star of the show. In this regard, Brunt’s was to be far from the only famous face seen on set, with the shoes of Wolf Manor’s lead about to be filled by a national treasure who could boast credits including The Vicar of Dibley, Bridgerton and Four Weddings and a Funeral. “We didn’t think we could get him,” said Brunt. “James Fleet was our hypothetical casting note from Pete. He kept saying, ‘we need somebody like James Fleet’, and it was constantly referred to – ‘somebody like James Fleet’. So we said, ‘well, let’s ring him and find out’. “I know he’s from an engineering background, which I am – I was a welder and sheet metal worker. He’s originally an engineer and his father was, so over a phone call which took about an hour before we even got talking about the script, we kind of bonded and he said that he wanted to do a horror film and he wanted to play the lead, so it was perfect for him. And he was magnificent.” Fleet joined the cast in the role of ‘Oliver Lawrence’ – a big-name veteran actor who is somewhat disgruntled to be slumming it in a vampire pic. He had himself referenced the phone call with Brunt in other interviews, and when asked why he chose to accept the part, he said: “I was desperate to do it after a long conversation with Dominic. His enthusiasm is infectious. On location in Shropshire, there was nothing hard about it apart from the night shoots and the cold weather. I had a hot water bottle under my cloak between takes. That’s very ‘Oliver Lawrence’, we should have written it in!” For Brunt too, Wolf Manor’s night shoots have remained a stand-out memory. “What was strange was becoming nocturnal,” he said. “At first we were kind of flagging by three or four o’clock in the morning, but once we adapted, we were finishing at six o’clock at around sun-up. That was the end of the day, so then people were cracking open a gin and tonic and having beers watching the sun come up and having a bit of breakfast. “That was really, really odd because you think, ‘you don’t start getting drunk at half-six in the morning after working soberly all night!’. Then people would go to sleep at maybe 10 in the morning, and then wake up at five, six, seven, have a bit of food, and then we’d get going again. It was a really weird world that we worked in.” Alongside Fleet, Wolf Manor’s other big star was, of course, its werewolf. Played by Shropshire actor Morgan Rees-Davies, the beast was brought to life through a combination of Rees-Davies’ formidable presence, and the genius of special effects wizard and prosthetics expert Shaune Harrison – a chap whose credits include Game of Thrones, Harry Potter and the Half-Blood Prince, and Marvel’s Avengers: Age of Ultron. “Before we started filming I wanted to go and see Shaune and the costume and he was sculpting the werewolf’s face as we arrived,” said Brunt. “He was showing us this invisible gauze with hair coming out of it that had been invented by an American company. With this, he could sculpt the suit with different sections of the face so it could sneer and growl without splitting, and the eyes blended brilliantly. You could get really good close-ups of the werewolf with it, and that’s not true for a lot of low-budget werewolf films, so that was very exciting.” “I think the fur itself was imported yak hair,” added Carl. “It looked amazing. Morgan’s about 6ft 4in, and when he puts the suit on he has to sort of go on to tip-toes so he’s about 6ft 6in. When you see him with all the lighting and the sound effects, it does the job and then some!” After a production and editing schedule that was wrapped within six months, Wolf Manor was finished and ready to terrify the masses at its world premiere in Leicester Square.“The London screening was at Frightfest, one of the UK’s premier film festivals down in Leicester Square, and the film was shown at the big IMAX cinema,” said Carl. “I was bursting with pride. And just to hear the audience’s reaction was brilliant.”“We did a lap of Leicester Square with the werewolf,” added Brunt. “It was brilliant – we got lots of pictures of it – but I don’t think we’d planned for the hundreds of screaming, crying children! So we got him out of there quickly. People were running out of the way and being frightened, so we quickly got in the pub!” It wasn’t long then before the beast came home to a very warm welcome. “We had the local premiere at the Ludlow Assembly Rooms in September,” said Carl. “That was great because it was like the film was coming full circle, back to its Shropshire roots. The audience reaction was even better – there were loads of gasps, lots of ‘arrgh!’ but also lots of laughter at the right points.” Reflecting on the film’s Shropshire location, Brunt and the crew could not have been happier.“It seemed like you could point a camera anywhere and there was beauty there – it was stunning,” he said. “I love the area, I think it’s incredible. And Ludlow is just such a pretty town – you’ve got the market, we went to the castle, it’s all just beautiful.”

Set for general release early next year, Wolf Manor has been picked up for distribution across the world – from North America to Europe and also the Far East.

As he and Carl grin with thoughts of the fun they had making the film, and the knowledge that audiences will soon get the chance to enjoy their work as much as they have, for Brunt, there are three great reasons above all others for the crowds to get excited.