Home » Articles » Breaking down the barriers

Breaking down the barriers 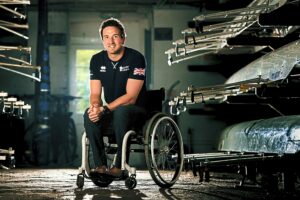 After life-changing injuries following a cliff fall, Darren Edwards vowed to live life to the fullest. He chats to Matthew Panter about his next challenge – seven marathons in seven days.

Seven marathons in seven days on seven continents. When you say it out loud, it sounds impossible. At the very least, rather improbable.And yet, as Darren Edwards prepares for the 777 Marathon Challenge, it won’t even be the most testing experience of his life. That came in the summer of 2016. Darren’s world was turned upside down, completely shattered, as he suffered a life-changing accident. On his descent down an exposed 120ft rockface, rocks shifted under his footing. He fell 30ft to the bottom and suffered a spinal cord injury.In that moment, the mountaineer and Army reservist knew his injuries were bad. He would later learn he had been instantly and permanently paralysed from his chest down. But, as he lay on the cliff edge, before the full extent of his injuries were known, he reflected and made a instant promise to himself.   “That afternoon marked a massive shift change in where I thought I was going with my life,” he recalls. “I was about to start my first job as a history teacher at the Priory in Shrewsbury and the Army Reserves was going well.   “But, as I lay after the fall, there were two to three hours before I was air-lifted away by helicopter and, in that window, there was a lot of thinking time,” he remembers. “I knew I couldn’t stand up or feel my legs so there was this dawning realisation that it could be a big injury.

“My brain was about to run away with itself and say ‘your life will never look the same again’. There is that spiralling moment where you can panic and mentally lose control.

“So I made a simple promise and one I have tried to hold myself accountable to every single day since.“That promise was that, whatever happened and whatever it turned out to be, don’t ever give up.“Every single day, since then, even in the moments it was really hard and I did break down, I have tried to live by that. “For example, my relationship ended while I was in hospital but on all of those days where I felt so weak and vulnerable, emotionally, there was a part of my brain which said: ‘Remember what you promised yourself’.” Darren has been absolutely true to his word, committed to living his life to the fullest, and never letting his disability define him. Over the past few years, he has participated in a multitude of gruelling and challenging adventures and activities – to prove to himself and others with a disability that anything is possible. Back in June of last year, for example, Darren led a team of five injured and wounded veterans in a Kayak4Heroes challenge. Kayaking for 26 days from Land’s End to John-O-Groats, they were the first adaptive team to successfully complete the 1,400km journey through some of Europe’s most challenging coastal waters. In May, Darren headed up another team of six individuals to row the English Channel. The 23 nautical mile expedition across the busiest shipping lane in the world, took 5.5 hours to complete. But now comes the ultimate expedition. The 777 World Marathon Challenge, starting on October 25, sees participants attempt to complete seven marathons in seven days – 168 hours – across the continents. Travelling from Antarctica, to Africa, Australia, Asia, Europe, South America and finally concluding in North America, the marathons provide vast differences in weather, conditions and experiences. Darren will be the first-ever wheelchair user to attempt it, which will incur further challenges in itself, including its efficiency and accessibility in the varying terrains, such as sand and snow. “There’s no real training plan,” says Darren. “You think, how the hell do you run seven marathons in seven days while also only using your arms and shoulders?! Google comes up blank for that one! “I have written my own plan as I go, trying to avoid injuries, but it’s going to be a real challenge. Antarctica will be the first test and that will be the toughest one. If I can get that done first, hopefully everything after that will be comparatively easier,” he says, with a smile and uncertainty in his voice. “I think if that was the last one and physically I was on the edge, having done six before, I would probably have nightmares, let alone sleepless nights.” Weather conditions are one challenge Antarctica will bring.Darren is unable to regulate heat in his lower body, and so the marathon could pose a risk of frostbite with its sub-zero temperatures. As a precautionary measure, medic checks will be conducted every four miles.   “It’s not just a marathon on the snow but it’s about managing my body. It’s making sure I am not developing any frost bite.“And then, of course, it’s the polar opposite in Dubai, where it will be plus 40 degrees. Since the injury, below my chest, my body doesn’t sweat and you over compensate above the line of injury. You end up drenched in sweat from the chest up.

“There’s a realistic chance that, in Antarctica, I could get hypothermia and, in Dubai, I could end up with heat stroke. I will be pushing the body to its absolute extremities.”

Darren admits it’s a challenge which will test him mentally, as well as physically but he says he is motivated by raising money for the Armed Forces Para-snowsports Team. The charity supports wounded, injured and sick military personnel.He hopes to raise £100,000 on his Darren’s World Marathon Challenge Justgiving page and has already reached more than £34,000. 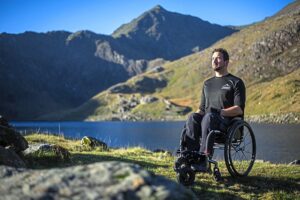 But, fundraising aside, Darren also hopes to inspire disabled and able-bodied people who have been hit by difficult times in their lives. He’s in a good place himself, in terms of his journey of rediscovery, engaged to Pesni or ‘TJ’ – “I did think once, will anyone love me for who I am? Now I am getting married next year and she just sees me as Darren.” He says he is also mentally stronger than ever. “For me, it’s about showing people that no matter what challenges you face in life, you are always able to come out of it stronger,” he says. “If by me doing this over-ambitious challenge, I can get through to someone who is having a dark moment in their life, that’s worth doing this entire thing, whether I succeed or fail.

“Between adversity and outcome – what happens and how it ends – there’s always space and time,” he says. “You can’t control a lot of things in life, such as what happens to you if you get an injury.

“But you can always control how you approach life and how mentally you tackle problems. You can give in – which is the easiest thing to do – or do the hard thing and have faith in your own ability, which a lot of people don’t have.“Regardless of what happens to you in life – injury, divorce, bankruptcy – we all go through own version of challenges and you are always able to control how you react to it.” Mental strength is something Darren will need to draw on for his expedition and he is determined to give it everything he has got. “You can be the strongest and fittest person in the world but in tough moments, there’s always the option to quit,” he says. “Someone said to me once ‘if you didn’t finish would you still be proud you had given it a go?’ My answer was, as long as I knew there was nothing left to give, then of course. As long I knew my shoulder would drop off if I went any further, I would be happy.   “I am not attempting this willy nilly but with the best intention of finishing it.“My accident will always remain the biggest challenge of my life but this certainly measures up to some of the biggest and most intimidating tests since, but I am ready. “When you go through a huge amount of adversity, you really learn how strong you can be mentally.”