Home » Articles » Ark of hope for the homeless

Ark of hope for the homeless

Daniel Morris looks at the work of charity Shrewsbury Ark as it marks its 50th anniversary year. 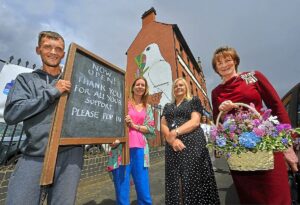 For five decades a local charity has helped the homeless and served some of those most in need without hesitation.

Now, as it celebrates its golden anniversary year, its work is more vital than ever, and support for it is all the more crucial.

Back in 1972, a group of volunteers got together and formed Shrewsbury Ark – a charity with a mission ‘to offer aid to those in need’.

The charity’s first help centre was on the site of Old St Chad’s Church in Belmont, Shrewsbury, running every evening from 7-9pm and, for a short time, on Wednesday mornings and Friday afternoons. Facilities however were minimal. The site was not heated, had no running water, was absent a lavatory, and featured no areas for privacy.

Fifty years on however, the Shrewsbury Ark team are the proud custodians of a new base that allows them to offer a level of support that matches their enthusiasm and dedication.

Last year the charity completed the purchase of the old Rock and Fountain pub, Castle Foregate, Shrewsbury. This was not far from a previous site it had occupied since moving from the church, and thanks to the hard work of volunteers, the venue has been revamped into a support centre which allows the Ark team to offer even more help than before.

The charity started operating from its new home in March, but the Ark’s new HQ was officially opened this summer by Lord Lieutenant of Shropshire Anna Turner, who unveiled a plaque at a special gathering.

Speaking at the time, she said: “There have been so many people involved in helping, and everybody wants to enjoy this moment. It’s a brilliant atmosphere. Everybody is absolutely delighted.

“Here, they can do more work that they know will be helpful. Hopefully this will be here long after we are gone, for the vulnerable people in Shropshire.”

On average the Ark now welcomes around 55 people a day through the doors, where they receive hot breakfasts and lunches, cooked by volunteers, and other necessary items such as toiletries, sanitary products and socks. The Ark’s outreach team supports those living on the streets, and also those who have moved into their own accommodation. The charity also currently supports a small number of Ukrainian refugees currently staying in local hotels who use its laundry facilities. 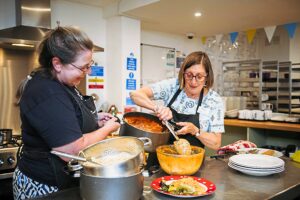 The ground floor of the former pub has been transformed to incorporate individual therapy rooms and activity areas, and an industrial-standard kitchen, showers, washing machines and driers have been installed. The upper floors include an office for the Ark’s manager, office rooms for staff and volunteers to carry out essential administration and meetings, and storage facilities.

Moving into the new premises has enabled the charity to expand activities and support services including GP clinics, SALUTE and counselling sessions, addiction abstinence programmes (intuitive recovery programmes in partnership with charity We Are With You) and also hepatology clinics through Shrewsbury and Telford Hospital NHS Trust (SaTH).

Shrewsbury mayor, Councillor Elisabeth Roberts, was impressed with the facility, and hopes all Salopians will continue to show compassion and respect for homeless people.
“We could all be in this position,” she said. “As an ex-care kid, this could have been me and, on a few occasions, it nearly was. These people are part of our community and we need to respect them as human beings.”
As the cost of living crisis continues to take its toll, however, the team at the Ark need more support than ever to help people in need.

With people across the country grappling with economic difficulties, charities such as the Ark are seeing fewer donations coming through their doors and are falling under immense pressure.
Recently, the charity issued a desperate appeal for stock, as they found themselves running low on almost everything.

The team at the Ark called for support from supermarkets and community groups after experiencing a shortage of sleeping bags, toiletries, fresh produce and clothing.
Manager Wendy Faulkner said the team are bracing themselves for the ‘significant’ impact of rising energy bills this winter.

“The cost of living is impacting everyone and people aren’t donating as much as they used to, especially due to the fuel and energy crisis,” she said. “The impact on us is going to be quite significant, our utility bills are going to be significantly higher and this will impact what we can provide as a service.

“We get lots of donations through Shrewsbury Food Hub on a daily basis, which is incredible. We also refer people to Barnabas Food Bank for support. But we are making 70 meals a day now and we’re always running out of stock.”

While the charity’s new base enhances the services it offers, the larger space means a bigger running cost.

The Ark team have appealed to businesses and friends of the charity for help, taking to social media to ‘beg and shout’.

“Local accountancy firm Mercian Accountants, Beanies Massato, Lyreco and Wenlock Springs are companies who support us via social media and don’t always get a shout out or thank you, so, you’re incredible, thank you,” said Wendy. “The public in general have responded really well so far and helped out – they’ve been brilliant, dropping off sleeping bags or a bag of sugar and sometimes staying for a cuppa.

“There is an increase again in people sleeping rough in the area, so we are in need of things people can use outside – sleeping bags, wet wipes, water , ponchos, umbrellas, hand warmers.”
In addition the centre needs coffee, butter, tinned tomatoes and tinned beans.

Shrewsbury Ark relies on the generous donations of communities in and around Shropshire in order to survive.

Without these donations, it cannot provide all of its services to those who are most in need.
“We welcome anyone and everyone to pop in, look around, and see what we do,” Wendy added.

To find out how to donate food or other items, visit shrewsburyark.co.uk